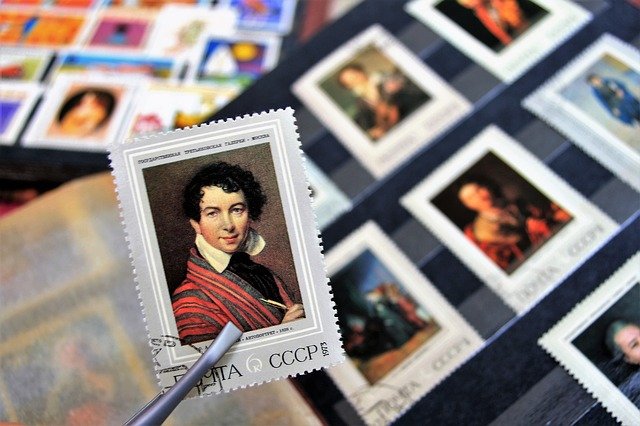 In the past we’ve written about how people are often unaware of the value of their physical assets, especially pieces they may have inherited from a loved one and stored away somewhere. If you found your grandfather’s stamp collection buried in the basement, you’d probably be tempted to pack the box back up and dismiss it as a sentimental relic. However, that might be a mistake, not only because of the potential value of the collection but because you may be missing out on an enjoyable hobby.

Stamp collecting came about in England in the 1840s, shortly after the first stamp, “Penny Black,” was printed. Over the years it evolved into an intellectual pursuit and a study of history. Stamps are snapshots of days gone by, capturing images of revered leaders, events and social causes.  They can also be extremely valuable, for example, those created as the result of a printing error or cancelled early on. The “Benjamin Franklin Z Grill” was only worth one cent when it was printed in 1868, but thanks to distinct z-shaped marks, one version was sold at over $900,000 and later traded for other stamps valued at three million.  Even old stamps that prove to be of little or no value (and there are plenty of those) provide a valuable education.

You might be surprised to learn that some of the most famous people in the world were philatelists, including President Franklin Roosevelt; author Ayn Rand; Sally Ride, the first woman in space; Simon Wiesenthal, famed Holocaust survivor and Nazi hunter; and even John Lennon. And while it may not be as common these days, stamp collecting is still a popular hobby around the world. In fact, according to this article from The Street, as of 2017 nearly a quarter of collectors invested their time and money in stamps – a larger portion than antiques, automobiles and wine.

Most collectors would agree that collecting should be based on passion, not just financial return. This may be even more so of stamp collecting, which is largely a solo activity. After all, it’s not like you’re going to have a group of people admiring your stamps as you would a painting on your wall.  That said, there are varying levels of obsession. A casual stamp collector can get by with tweezers, a magnifying glass and an expert to advise them on purchases, while others will delve deep into the rich history behind each piece. To determine whether they have a valuable piece or a mere lookalike, they will spend hours pouring over official stamp catalogues; painstakingly count the number of perforations with a perforation gauge; and examine their stamps using a watermark detector, rather than just holding them up to the light. They also take great pride in their albums – sometimes having them custom-made – and mount the stamps themselves, as FDR did throughout his four-term presidency.

Regardless, there are steps you must take to maintain the value of your stamps. They must be kept in a cool, dry, dark place where they will be safe from sunlight and many experts also advise keeping them up high so they cannot be destroyed in a flood.  And whatever you do, don’t handle your stamps with your hands because the oils in your skin can damage them. Stamp collecting has continued to evolve in recent years, thanks in large part to technology.  As with any other physical asset stamps can be digitally catalogued via an all-in-one solution – including photos and information about identifying marks, value, and previous owners. Collectors can also communicate securely within these apps to arrange sales or trades, or simply share their love of the hobby. Most importantly, these tools ensure that your collection will be included as part of your estate, and your family legacy.

Do You Know About Digital Tools For Estate Managers?

Collecting rare plants is not only an investment, but a serious responsibility.